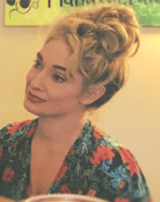 The Studio Space Director & Voice Instructor
​
Jodi Ann Curtis is a graduate of the Manhattan School of Music in New York City, where she holds a Bachelor’s of Music  in Classical Vocal Performance, with additional studies in Vocal Pedagogy at Alverno College, University Wisconsin-Milwaukee and Shenandoah Conservatory: CCM Institute. Jodi has been a featured guest soloist in NYC with the Baroque Aria Ensemble. In Wisconsin, she has been a soloist with the Milwaukee Symphony Pops,  The Skylight Theatre, and awarded the People’s Choice at the District Metropolitan Opera Auditions.

Jodi has been working with children, teens and adults in areas of Private Voice Education and Personal Development for over twenty-five years. She is passionate about the preservation, balance and overall vocal health of the individual.  Jodi enjoys the challenges of cross-training students of all ages in multiple genres such as pop, folk, musical theatre, rock, rhythm & blues and classical music. She has received training in Somatic Voicework, the LoVetri Method, which rests on scientific principles and a holistic respect for the human body while singing. Recently, Jodi has continued her contemporary commercial music studies with teachers from around the world at Virginia's Shenandoah Conservatory, CCM Institute.

Jodi is proud of all of her students' progress in the voice studio and beyond. In the state of Wisconsin, her students have been nominated and awarded the Exemplary Soloist Awards at the Wisconsin School Music Association Festival.  Students have been nationally recognized on television shows such as The Voice and American Idol. Over the years, she has had the pleasure working with singer-songwriter's helping them enhance their voice and style for the music industry, while being featured headliners for Summerfest - The World's Largest Music Festival.  With great pride, her students has been finalists and semi-finalists at Wisconsin's Chapter of the National Association of Teachers of Singing Auditions. Jodi has been a proud member of National Association of Teachers of Singing since 2008.
​
Email: jodi@studiospacewi.com